Just over a year I blogged about a new catering and food gift company called Salty Dog after I received a box full of sea themed goodies which would delight any seafood lover. Operating out of a converted Rice Beaufort Horse Box, owner Cales had been providing event catering since late 2017. A couple of months later, I was then invited to the opening of her small restaurant in Cullompton, as she dived into a more permanent home.

And what a year it's been for Cales! She has gained an impressive following in such a short space of time; it has evolved from a cafe into Cullompton's seafood restaurant, with the name evolving into Vitamin Sea. 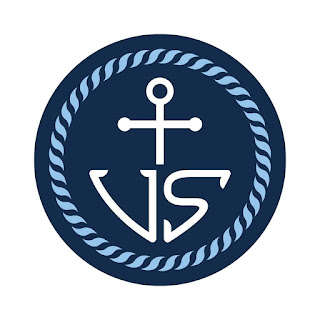 I've been lucky enough to sample her food on a few occasions throughout the year and was chuffed to be invited as her guest to come celebrate the first birthday of Vitamin Sea.


I'm lucky enough to be invited to some great restaurants and, as someone with many years of hospitality experience behind me, I look at every aspect of the venue from the lighting, heating,  cleanliness of the little boys room to how much of a buzz the venue is producing. I often get disappointed with places that promise so much but fall on their arse, and I leave thinking 'I'm bloody glad I didn't pay for that evening' - going out for a disappointing meal is not what you plan with your hard earned cash right?. But I'm pleased to say that a huge amount of work has gone into making Vitamin Sea a warm and welcoming place to eat some great honest food.

A small restaurant with open kitchen one end and full glass frontage onto Cullompton's high street the other, the use simple themed decorations has made the space seem bigger than it is and hasn't crammed too many tables in that you end up hearing more of the neighbouring tables conversation than your own. 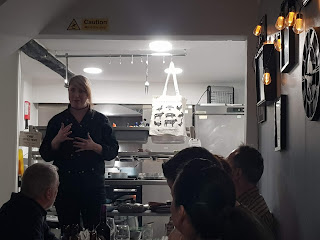 For the birthday evening, Cales had obviously spent a great deal of time coming up with a five course  menu with dishes that I think really reflect her personality. She could have made life easier for herself but that's not what she does. The result is dishes that we may have never had before or dishes that we may not order if we saw them on the menu, which is risky but I'm very pleased to say that the main ingredient in every dish is always the star of the show, whilst other things on the plate are there to enhance the dish. Cooking and serving a five course set menu to a restaurant full of hungry diners at the same time takes skill. 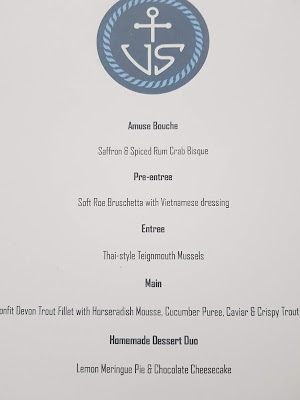 The evening started with a couple of beer samples from the brilliant Powderkeg Brewery who were on hand to talk all things beer to each table; it's great to see local businesses working together. Soon the amuse bouche arrived - a cup of seafood heaven. A very tasty bisque full of flavour, rich from the crab and a slight aniseed back note to help cut through the richness. A bisque is only as good as its stock base and this was made very well, a great start.  It was a bit too rich for my son Kyle, so I got to have two cups and, if I'm honest, I could have sat there all evening with the cooking pot and a straw. 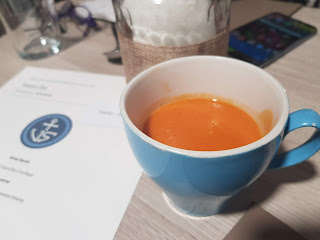 Next to find its way to the table was soft cod roe bruschetta with a Vietnamese dressing. This dish was going to have the dining room divided (the marmite effect); the roe was perfect and the toasted bruschetta stayed crispy, so no soggy bread here with the dressing being a great addition to the dish. I do like roe but wouldn't necessary order it, but that was the idea - to have a dish to take us a little bit away from our comfort zone, using a less well-known product, and it paid off - as I looked around there were more empty plates than I expected, so well done for taking a risk, (and yes I do like marmite). 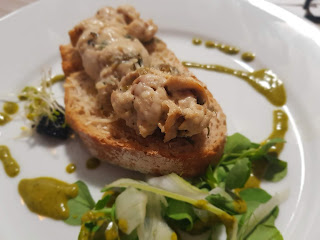 I was very excited about the next dish to find its way to the table - mussels! One of my favourite things that comes in a shell, but so many restaurants can't cook them well enough so you end up with mussels that have fused to the shell from being overcooked, and if you happen to find a chisel and a blow torch in your pocket to prize them out, they end up tasting like the pig ear treats you feed to a dog. I'm very happy to say the cooking of the mussels was absolutely perfect, which I was pleased about as I left my tool box in the car. They were plump, sweet, salty, soft and the rich Thai broth that coated them was very tasty. All I could have done with was a big chunk of soda bread on the side to mop up all the loveliness in the bottom of the bowl. 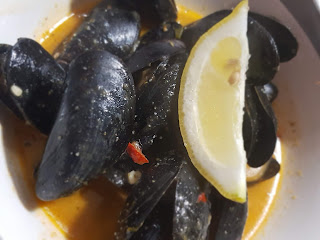 Of all the dishes on the menu, I was really pleased to see trout; it often gets overlooked which is a shame as it has such a delicate flavour. My favourite way to cook it is stuffed with a watercress cream and served with a big pile of buttered Jersey royal potatoes but enough about my food heaven. The trout was cooked confit style; this is where the fish is cooked in, for example, olive oil or duck fat, slowly - not an easy thing to do with such a delicate fish that, if undercooked, has a flabby texture and if  overcooked it falls apart, becomes dry and is not nice.

It's great to see that Cales has mastered the cooking of the fish in this way; it was beautiful. Packed with flavour, it was one of the best confit trouts I've ever eaten. The horseradish mousse was creamy  and not to fiery, the caviar popped in the mouth with all its saltiness flavour and the skin was crisped to perfection. It shows that time was taken to prep this fish, instead of just making things easy and throwing the fish skin away. I'm not a cucumber fan so the puree was left to one side but I'm assured that it was delicious by my wife, Lauren of Dining Devon. 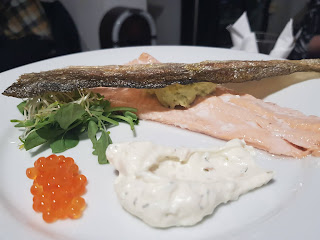 Now at this point Cales should be feeling rather pleased with this review but I'm afraid she's not the only talent in the kitchen. Kudos to her mum on the amazing chocolate cheesecake she made that was part of the duo of desserts we had to finish the evening. It was smooth, rich, not overly sweet and had a firm but crumbly base - it was cheesecake heaven. The other dessert was a lemon meringue pie; again I'm not the biggest fan so after some negotiation my pie was swapped for half a piece of Lauren's cheesecake. I was told between mouthfuls that is was really good, sweet and tart with perfect meringue, just as it should be - turns out Cales isn't massively keen on making desserts due to it's precision, but she certainly has the skill. 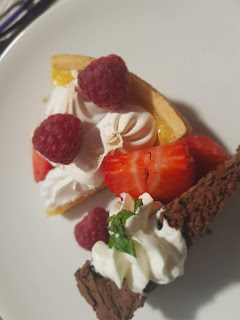 Cales should be really happy with herself; the evening was a great success, with each dish being made with love. What she has achieved within a year is a credit to her hard work and the support of the people around her. She has all the skills of a great chef but she still needs to believe in herself a bit more. It's so good to see an independent restaurant succeeding, being supported by the local community, and I hope it goes from strength to strength and I'm invited back for the 10th anniversary.

Advice for the future? Bring Salty Dog back by opening a deli next door and sell the wonderful products I reviewed in my original blog too - you never know, she could take over Cullompton like Rick Stein has taken over Padstow. In all seriousness, Vitamin Sea is a humble venue, run by a passionate young chef patron, showing local fresh fish off without fuss or a hefty price tag.

(Cales' lovely Horse Box and the lady herself are still available for hire for events, as well as her restaurant being available for private parties) 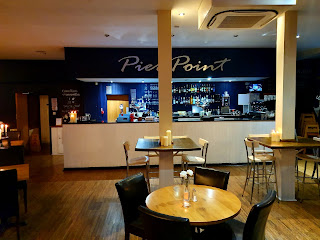 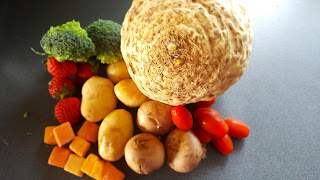